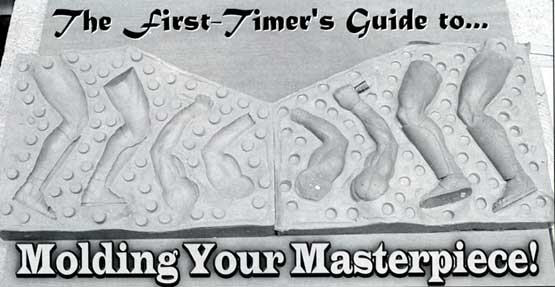 Publisher's Disclaimer: Before we let you get into this article, we would like to say for the record that it is the position of this publication that we are opposed to any form of illegally molding and casting something that does not belong to you. This article is not designed to teach or to encourage someone to take what they do not rightfully own, make a mold of it and profit from someone else's hard work and copyrighted material. That is simply wrong both morally and legally, but we know this disclaimer won't stop those who live on the other side of the copyright infringement laws and we also know that it's not going to push anyone over the edge into the dark underbelly of the modeling industry: recasting. Let your conscience be your guide and for those of you whose consciences have long ago been "seared," then nothing we can say will make a difference. However, for those who would like to learn the basics of molding and casting your own original product, this article may serve as a beginning.

We've run articles on molding before, but this one is slightly different. Not really knowing my way around silicone rubber, I wanted to see if I could successfully mold something. That something was our newest kit, David and Goliath.

Okay, I will be the first to admit that prior to this article, I didn't know how to create anything more than an open-face mold, which is reason enough that we paid Mark Brokaw to do all of our molding and casting on our models and have never received one complaint about the quality. In fact, we've received tons of compliments about the tremendous job that Mark does for us in the molding and casting department. I'm no Mark Brokaw or Dave Bengel or - you fill in the blank - when it comes to molding and casting product.

Over the years, since we first began producing our magazine and models, people have asked us what the process entails. I've quickly and frankly pointed out to these folks that I had little idea of how the molding and/or casting end of things was done. I wasn't afraid to tell them that because that was very much the reality where I was concerned.

Well, I had finally gotten to a point where my curiosity was fully piqued. I wanted to learn the process for myself and find out exactly what goes into it and how it's done.

The first thing I did was talk to Dave Bengel, who is the owner of Skyhook Models. If you've ever purchased a Skyhook product, you already know that quality goes into each piece that they produce. I asked Dave if he would be willing to teach me the ins and outs of molding and casting using our next project from Modeler's Resource David & Goliath. Dave responded with a slightly less than enthusiastic "yes" (knowing ahead of time the potential difficulties that awaited us), and that is how this article has been
done. Without Dave's immeasurable guidance and know-how, you wouldn't be reading this right now. I never realized exactly how long it would take to mold something, but this particular model, which was beautifully sculpted by Gabriel Garcia, was in
numerous parts and required someone with a deep knowledge of molding and casting to get the job done right. Thanks Dave!

The second person I contacted was Randy at Bare-Metal Foil. They sell a full line of supplies everything you need for molding and casting. They were kind enough to provide me much of what I needed for this project in the way of Silicone Rubber, Resin,
Release Agent, Kleen Klay and a few other odds and ends. What I saved on doing my own molding and casting and the product that allowed me to do both is being passed onto the customers in the form of the price of the final two-figure kit.

Once Dave said he was in and the folks at Bare-Metal indicated they would be willing to help with the project, the green light was fully blazing. Now, I sat back, waited for the product from Bare-Metal to arrive and for Dave and I to get a free day in our schedule to begin the process. It happened sooner than later and before I knew it, we were sitting at my dining room table looking at all the parts, with me particularly interested in watching Dave decide which parts would be molded together and exactly how the molds would be prepared.

I found out a number of things as Dave guided me through the process of creating molds. First, I found out that this was fun. I was gaining some firsthand knowledge about something that had eluded me for quite some time and someone who was very good at it was teaching me. Second, I quickly realized that this is not something I would choose to do for a career. My hat is off to people like Dave and Mark who routinely do this, sometimes day in and day out. It's fun, but it's not that much fun! Give me an article to layout or type or a model to paint any day, thank you very much!

The first thing Dave taught me is that the parts need to be somewhat embedded in a clay "floor." This is done by taking the clay and flattening it out, piece by piece and then laying the parts on top of that area , Once the parts are placed in positions that are satisfactory to the molder, then it's time to fill in the areas around each part so that there are no spaces, holes or irregularities surrounding each part. The clay then needs to be smoothed out nicely and excess clay should be removed. Whatever you leave behind will become imprinted in the rubber mold! You can look through the photos to see this process.

The left side of the photo shows the clay that has been smoothed with alignment holes having been placed as well. Now when rubber is poured over this, the surface of the rubber will conform to each part and come away with a nice, even surface.

Once all the clay has been added to the "floor" and around all the parts and smoothed, then a wall must be fashioned to hold the rubber mixture while it cures. The best and probably cheapest thing to use is Foam Core™, which is available in just about any drugstore or arts and crafts outlet. You'll want to make the walls
about 1/2" above the highest point so that the parts are fully covered, yet it won't be so high that you'll be wasting a good deal of rubber, which isn't cheap! The more rubber used, the less flexible the mold will be. This may result in tears and/or premature aging.
This is a bit of a guessing game here to be able to judge. There should be at least 1/2" to 3/4" between the edge of the parts and the clay. You'll need room to create alignment holes. You will cut the clay all the way around in straight lines (square, rectangle, triangle, etc., whatever the design of the mold dictates) and then
add the wall. If your mold is circular, then it will be difficult to use Foam Core, but some molds work better in the round depending upon the part as we found out for one particular part.

When creating the wall, you'll want to have the wall as one long strip, sliced on the outside so that you can bend it around a corner. You won't fully cut it off until you get to the last bend and join. Use Scotch™ tape to tape the two ends together and then tape the inside corner where these two ends meet as well to eliminate
a seam line on the corner of the rubber.

Once you have the clay smoothed, the walls built and taped, you are ready to create the alignment holes. These were done by using the eraser end of a pencil and pushing it gently into the clay, while twisting slightly. They were placed at intervals so that the second part of the mold would "marry" itself into these holes and create the male side of the alignment holes. These holes are there so that the process of aligning the two sides of the mold when casting is accomplished much easier.

This particular rubber was created by using the same amounts of both parts. Once you have equal amounts of both parts, mixing is necessary to ensure that both parts meld fully. One part was pink and one part was blue, so when they are thoroughly mixed, they turn a nice shade of purple. As you can see in the photos on the next page, we used a throwaway brush to spread the rubber around, after dribbling the rubber onto the top of the mold around each of the parts, as opposed to just pouring in the rubber and letting it settle. This method avoids trapping air bubbles, which would then become part of the mold. You'll also want to take care to gently pull on the brush tip before using it to spread the rubber so that any loose brush strands will come out in your hand and not become embedded in the rubber.

Finally, once each part was completed brushed over with rubber so that there was no space or trapped air bubbles, the rest of the rubber was poured into the walled area so that the first side of our rubber mold would be created. Cure time was four hours, but I decided to let it sit for a day or so.

This is essentially it; however, it takes practice and a good eye to know which parts go together and this was only for the first few pieces. There are plenty of additional pieces in this kit to be molded.

Next time, we'll go through the process of casting and all that it entails!

Bare-Metal would like to thank Fred DeRuvo at Modeler's Resource Magazine for allowing us to share this material with our visitors. Images and text Copyright © 2002 Adroit Publications.